The power of chlorella which has been on earth for 540 million years. 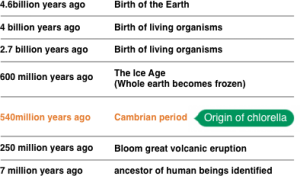 Chlorella, which is attracting widespread popularity today as a basic health food, has an extremely long history of existence long before the birth of human. It is said that it is 4.6 billion years ago that earth came into existence, and 2 billion years ago that organisms called as cyanobacteria, which is root origin of plants as of today, whose main trait is photosynthesis has firstly came into existence on the earth.It was over 800 million years ago in which most of life on the earth has became extinct due to shortage of sun right, which had been sealed by thick atmospheres. Very few species, which have survived that adversary conditions prior to the era called Cambrian beginning at 600 million years ago, includes Chlorella which, at later 540 million years ago has diverged from common ancestor. Since then, chlorella has survived every convulsion of nature in the long history, and remained unchanged until today.

Why could chlorella survive in the long history?

Why could chlorella in the long history survived every convulsion of nature and remain unchanged until today? The first reason is that chlorella is so small with 3 to 8 micrometers in diameter, and also covered by tough outer cell wall protecting in the internal organs from environmental changes outside. The second reason is that it has rapid reproductive ability. There are two ways in reproduction of creatures, one is sexual reproduction and other is asexual reproduction. Chlorella is asexual reproducible plant. It divides four times every 20-24 hours. One cell reproduces 4 new cells the next day, and 16 cells the day after… Chlorella has kept reproducing since over 2 billion years ago.

Why did people eat chlorella?

Chlorella was firstly discovered by the Dutch microbiologist, Dr. Beijerinck, in 1890, and has been known for more than 100 years. The name Chlorella derives from two Latin words meaning ‘green` Chlor and ‘small’ ella and it has been found by German Dr.Lindner who has announced the study research focusing on chlorella’s enriched protein and lead the further research on feasibility as nutrients source to deliver solution for the world wide food insecurity problem.

Although the researches were interrupted during World War II, the studies were resumed after the war. In the U.S and the former U.S.S.R, they investigated Chlorella as a space food, and began to cultivate it. In Japan, in order to resolve the food insecurity after defeat in the war, the research on full-scale culture of chlorella was started by the advocates of Carnegie Research Laboratory. However, the interest in Chlorella had gradually vanished due to the low harvesting efficiency and high cost as well as bumper crop of rice.

Later on, being recognized its health beneficial effects, chlorella attracted attention again. In the middle of the 1960s, chlorella came into the world market as nutrients enriched health food, and became popular in the 1970s with more than 200 brands. Since then, Chlorella’s research is progressing even in the 21st century.
Recent research achievement using DNA analysis makes it possible for chlorella to be traced back to 540 million years ago origin.
“nutrigenomics”, which screens base sequence of DNA pattern and “metabolome analysis”, which also can detect marginal fluctuation of blood circulation both clarifies the relationship between chlorella and human body.
Please look forward having a feedback from us.

1)The origin of chlorella backs to 540 million years ago.
2) Chlorella has a tough cell wall and capability of reproducing
3) Chlorella was began to use as food in the end of 19 centuries. Even now its usefullness is under investigation.

Chlorella is well- known as a health food. We provide you basic knowledge and related information about chlorella in detail.